I wrapped my sweater tight around my body, shielded myself from the wind, which had been kicking up all morning. Anxiety rose in my chest as I waited. Why she had wanted to meet here, after all these years, I didn’t know.  END_OF_DOCUMENT_TOKEN_TO_BE_REPLACED

I’ve started on the first draft of a new project.  As much as I wanted Skyland to be a serial (and perhaps someday, it will), I didn’t want this one to be.  But, you can’t tell a book what it should be.  And this one, despite my planning efforts, is a serial.

I’m writing a book about a world where some people (the rich) hibernate in suspended animation, while others (the poor) take drugs to never sleep.  A bunch of stuff happens.  It’s a tale, or more accurately, multiple tales, of addiction, love, and wealth divide.   There’ll be overdosing, withdrawal, sacrifice, social pressure, and challenging all that the characters know.  END_OF_DOCUMENT_TOKEN_TO_BE_REPLACED

Last Week’s WW: Getting in Their Heads

I’ve been reading a few different series of books lately.  I’m new to the multiple-books-in-the-same-universe phenomenon.  These days, it seems like every book is just one in a series.   Sometimes that’s a very good thing.  Sometimes, not so much.   There are a few rules that I’ve compiled for writing a series. END_OF_DOCUMENT_TOKEN_TO_BE_REPLACED

I recently read the book The Martian by Andy Weir.  And, like everything I say I read, I really mean that I had it read to me by audible.   Either way, great book!    END_OF_DOCUMENT_TOKEN_TO_BE_REPLACED

Kade pulled his goggles over his head, snapping them snuggly over his eyes.

Kade smiled broadly and plunged ear plugs into his hears. Even with the neon orange sound stoppers, he could hear the hoots of Halden and the Twins. They readied themselves, and settled into quiet concentration.

advice, author, behavior, characters, how to, how to write, point of view, pov, realistic characters, writing

There are a lot of different point of views that one can take when writing a story.  First Person, the less popular Second Person, and all the types of Third Person: Omniscient, Limited, and Multiple.

Different POVs are applicable and best for different situations.  But, as limited as you may want to make the point of view in your story, you still have to explain a characters actions, of people will be confused.  The last thing that you want is for the reader to be sitting around thinking:

Huh?  That seems odd and unnatural.  I can’t figure this character out at all.  Now I’m frustrated and done reading.

END_OF_DOCUMENT_TOKEN_TO_BE_REPLACED

I’m from St. Louis. North County to be more specific.  I moved around a lot, but went to school in the following districts: Hazelwood, Dellwood, and Ferguson/Florrisant.  The last two is where the rioting is happening.  The first one is right next door.  My nephew lives in the troubled areas.  Some of my friends as well.  My facebook is filled with constant information about it.  Right now I even have a live news feed on in the background.

The riots broke out during my visit home.  I didn’t get to see some of my friends because they were afraid to leave their homes unprotected, or to be caught outside after dark (this was before the curfew).

We may never know the truth about what happened.  In my opinion, cops should wear little cameras on their uniforms so that there is never a question of what was right or wrong.

What is wrong is the violence, on both sides.

I’m not sure what looting a McDonnald’s or burning down a Quicktrip has to do with what happened.  There have been countless break-ins and even more shootings from both sides.  There has been such a spike in crime that the police response is almost justified.  Almost.

My friend’s and family back home have to live in fear.  Fear of the roaming gangs and fear of the over-assertive police force.  I worry for everyone there.

Many of the people I know in Missouri are… libertarian?  Somewhere between liberal and conservative that are afraid of overreaching government.  The show of police force has them all angry.  The rioters and violence has them angry.  The race thing has everyone angry.  I don’t want to get into race.  All I can say for everyone who lives or has lived in that area is that we all come from the same place.  It is all of our homes.

The violence, on both sides, needs to stop.

Last FFF: What the Highway Prefers

Dead doesn’t always mean gone. Trust me on this, I’m something of an expert. I died sixteen years ago. Okay, so I suppose that’s not that long in the grand scheme of things. You could say that I’m something of a baby ghost. But believe me, you don’t want to meet the old ones. They’ve lost their minds. Or, what passes for a mind when you don’t have a physical body.

I miss my body and interacting with the physical world. Not that I can’t do it, I can if I try. I do it as little as possible. Not because I’m concerned with the effect of haunting people. Honestly, it sounds kind of fun.

No, I don’t interact with the physical world because it would kill me. Like, really kill me. I know what you’re thinking. I said I had died. It’s true. But there’s death, and then there’s nothingness.

END_OF_DOCUMENT_TOKEN_TO_BE_REPLACED

Sorry for being quiet this week.  I was traveling.  A few days I didn’t have internet.  My sister got married in a destination wedding back in June, and had her reception back home last weekend.  I haven’t been home in about a year and a half, so I took a week and went.  It was a great trip, but exhausting.  And a few things went wrong. END_OF_DOCUMENT_TOKEN_TO_BE_REPLACED 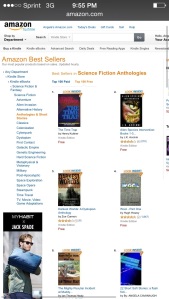 A few days ago I mentioned that I had decided to collect some of my flash fiction and offer it on Amazon as a collection.  I edited it, made some pretty titles, and put together a cover.   END_OF_DOCUMENT_TOKEN_TO_BE_REPLACED