I know this is a bit belated, but I wanted to mention Comic Con, and I hadn’t gotten around to doing it yet.  In July I was lucky enough to attend the San Diego Comic-Con.

My day began with an author meet-up with Hugh Howey.  He brought donuts, there was maybe a dozen of us hanging out, it was an amazing experience.  Around the convention center, there were a giant mass of people.  There was a great deal of events, showcases, and costumed people outside of the comic con.  A person could spend all day just walking around outside.

(I had a picture of the horde of people outside, but I lost all my phone photos 😦 so I only have the ones that made it to Facebook before I lost them all.)

I wasn’t exactly sure what to expect inside.  I went in and found a lot of vendors and more people.

At first, I was dissapointed.  I thought to myself, “this is just a bunch of people selling stuff.”  Thankfully, I was quickly proven wrong.  They were showing a few exclusive trailers in the main area.  It was really cool to gather around and see sneak peeks.

Next, I realized that most things were interactive.  I met R2D2.  He was real, remote controlled, and beeped and moved and everything.

There was a place to dress up with props and get your picture taken, which I seem to have misplaced that photo, too.  They gave away Yoda Ears for dogs.  The pair I got was too small to put on my dog, so I gave it to him as a toy.  He loved it and it became one of his favorite things to play with for some reason.

The Walking Dead had a neat, walk-through zombie area. 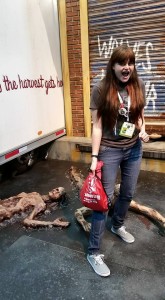 I also got swag.  I got a free ARC book, as well as a few comic books.  I got a drawstring bag, and a pair of sunglasses that I still wear just about every day.  I got a poster, a water bottle, probably some other stuff…

The author area was great.  Hugh Howey was there, of course.  I arrived at his booth too late to get a free copy of Press Start to Play, but I did enter to win (and didn’t win) this arcade game (I loved Ready Player One):

There were lines of people waiting for author signatures and lots of giveaways.  There were many more experiences.

All in all, I was utterly unprepared for Comic-Con.  I chose not to attend any of the panels.  For one thing, I didn’t want to have to wait outside in the heat for hours just to sit in the back of a room.  (Hollywood has spoiled me.  If I want to see a panel, I can just hit up the Paley Center, usually for free or $5.  I saw a lot of panels there when I first got to Hollywood, American Dad, Awkward, Vampire Diaries, and many more.  It’s a fairly intimate space.  There are other places and times I’ve seen things like this, too, like LA Book Festival when I saw Scalzi and Wil Wheton have a conversation and I was just a couple rows back.  Like I said, spoiled.  It’s the same reason big, expensive concerts don’t excite me.)  I learned too late that there were smaller talks going on in A hall.  Those might have been neat.  There were also a lot of other things to do there.  There were giant, interactive areas outside of the convention center, but that were still part of Comic-Con.  By the time I found them, I was exhausted.  I wasn’t prepared for just how much walking there’d be, or how stimulating the day was.

I would definitely go back another year.  In fact, I’m hoping to go back next year, depending on how life goes.  I’m hoping that the Halloween costume I’m making right now will be good enough to wear to it.

I can’t explain exactly why, but honestly, Comic-Con was one of the best days I’ve ever had.

advice, how to end a chapter, tension, writing

Yesterday, my fella and I were out writing, and he asked me: “How do you end a chapter?”

This got me thinking.  I’ve been learning about and focusing on tension lately.  I think that a good way to end a chapter is by ending it with tension.  You could do this a number of ways.  You could end it with a big cliff hanger.  Or you could go smaller, more subtle.  However you do it, that last paragraph, especially that last line should intrigue the reader.  There should be something to it that either screams or hints that there’s more to come.  It has to make them wonder.  It has to make them need to know what happens next.

That’s my opinion on how to end a chapter.

If you plan to be an author, some day you will publish.  Maybe it’ll be with the Big Five, or perhaps you’ll self-published.  Maybe you’re already published.  However it happens, it’ll happen, and you’ll probably want to shout it from the roof top.  You should do this, well, maybe not from the literal roof top, that could be dangerous.  But you’re excited, and you have every right to be.  Publishing is a huge accomplishment, be proud.

The thing is, not everyone will be as excited as you.   END_OF_DOCUMENT_TOKEN_TO_BE_REPLACED