It’s that time of year again.  I’m sure that by now you’ve heard, and possibly even participated in Nation Novel Writing Month.

After much debate with myself, I’ve decided to participate in NaNoWriMo.  I was hesitant to do it because I’m in the middle of a few things.  But I’m not going to stop working on my other projects. Which includes:
-Polishing a full length novel, Otherworlders.
-Working on writing 3 more books in my Sleep Saga serial project.
-Doing a second draft on a short story story (which is quickly turning into a novella).
-And, of course, posting to this blog.

“A mismatched group of teens must come together to figure out how to survive after life as they know it, as well as most of the population, is destroyed by a biological weapon. Unbeknownst to them, they haven’t been left unchanged. The biological weapon has made them something more than human. But there’s another side to the evolutionary coin, and they’re being hunted by it. They must form new alliances and put aside old prejudices as they race against time to save one of their own as he threatens to turn into a murderous subhuman.”

There are some people who don’t like NaNoWriMo.  They think that what’s produced from it is junk.

END_OF_DOCUMENT_TOKEN_TO_BE_REPLACED 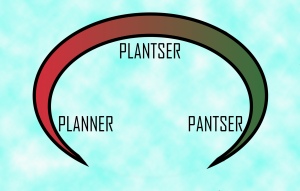 With NaNoWriMo only a couple weeks away, there is a question that keeps popping up:  “Are you a planner, or a pantser?”

Planners like to outline.  More than like.  They need to outline.  The idea of writing without a game plan is like being dropped into the middle of the ocean with only a pair of water wings.  Sure, you can swim.  But you don’t know where to go.  You might find your way to shore.  Or, you might end up farther out to sea.   END_OF_DOCUMENT_TOKEN_TO_BE_REPLACED